When I was in my twenties I regularly went walking in the Derbyshire Peak District with several friends who were keen on the outdoors. I, in contrast, was very inexperienced and went along for the company rather than the exercise, so it usually 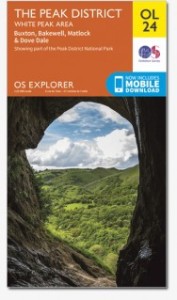 wasn’t long before I would become a little grumpy about the pace and distance. Sorry guys. But I did love the picnics because that was when we actually sat down for a while and those meals always tasted wonderful outdoors. I still remember the mushroom and potato curry, cooked the night beforehand, packed in tupperware and then carried in a rucksack for miles before being heated up over a small stove and eaten atop some remote sheepy moorland. Some of the best meals I’ve had.

My companions were also very keen on map-reading. I, however, thought of maps as a massive distraction from the business end of walking which involved feeling the sun warm your pallid city skin, breathing cold clean air,  and treading resolutely across springy turf in sturdy boots. I seldom joined in when maps were being consulted and had no understanding of the obscure ‘legend’ information contained therein.  I didn’t know where I was, and I didn’t care. I just liked being out. (Of course it goes without saying that without the map-reading expertise of my friends I would inevitably have ended up lost, cold, and miserable.)

Anyway, digital maps are a gift for map-phobics like me because they make life so much simpler, although of course following a GPS satnav is nothing at all like the rich experience of browsing an Ordnance Survey 1:25 000 Explorer where each 4 square centimetres contains all the details of 1 square kilometre of landscape.

But that is just a preamble to the real point of this blog post, which is that the nice thing about technobiophilia is it brings all kinds of interesting people to my virtual front door and this week it brought queries from Sheffield Hale, a map-maker and resident of the city of San Francisco. Sheffield created the SF Nature Mapping Project and he’s also a member of the wonderfully-titled Nerds for Nature group, whose aim is to bring together “people with a passion for technology and the environment to understand, protect, and explore the natural world”.  Sounds pretty technobiophilic to me.

Sheffield’s Nature Mapping Project uses new technologies to connect people to nature. It’s early days yet and his work is ongoing but so far he’s produced a map of stargazing events in and around San Francisco; a map of some of the best places for children and tourists to experience nature in San Francisco, including where to bike in parks,  see wildlife, and enjoy local wild lands, and a map of parks in the area where wifi is available. He’s also just added a new section inspired by technobiophilia called 24/7 . It’s a place to share ideas on how to make screen time healthier and more enjoyable. If you have suggestions for apps or techniques please do send them along here.

And let me know if you’re running an initiative like this in your local area. Perhaps eventually we can build a map of technobiophilic maps.