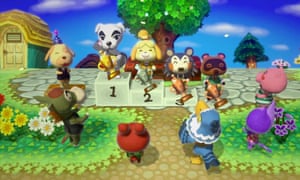 A growing range of video games take us, not into some high-tech future, but into an imagined rural past that poets, painters and playwrights have explored for centuries

Here’s an excerpt from a fascinating and well-researched article by Holly Nielsen about the nature scenes in video games:

Story of Seasons is a video game in which you spend hundreds of hours very slowly growing an agricultural empire while attempting to convince a villager to marry you by giving them an egg every day. It is a game about hard work and settling down. The only thing you can fight in Story of Seasons is the natural rhythm of rural life – and it is a fight you will lose.

If this sounds weird to you (and I’ve certainly faced difficulties explaining the appeal of the game to some friends), you need to think about Story of Seasons in a broader context. There is history going on here.Since we first began to live in cities, we have yearned for the innocence of the country. The ancient Greeks used epic poetry to eulogise the lives of herdsmen and shepherdesses; in the Elizabethan theatre, dramatists often took their characters out of the court and into wilderness; the Victorians wrote novels that bestowed nature with tragic romance. We have video games.

Partly, this is mechanistic: there’s been a discovery that the uncertainties and rhythms of farming make good gaming fodder. Zynga’s early Facebook game Farmville was a spectacular success, attracting over 40 million active users, with its simplified take on crop production and animal care; meanwhile, the much more complex PC series Farming Simulator has shown that there’s a mass audience for authentic simulation complete with branded machinery and multiple authentic livestock breeds.

But there is also something else going on, a sub-genre of games that invoke an almost twee sense of community and that glorify and sentimentalise rural life, very much in the pastoral style. Nintendo’s Animal Crossing titles put players into a village populated by anthropomorphic animals while Natsume’s Harvest Moon titles are all about bringing a decrepid farm back to life. Although the former doesn’t directly feature farming (apart from the viciously cut-throat world of turnip trading) they’re both about getting back to nature, about building a strong sense of community and about developing a close connection with the rhythms of the seasons and a slower pace of life. They are designed, just as the pastoral works of Theocritus, Marlowe, and Tennyson were, to explore the idea of the rural idyll; to take us beyond the artifice and alienation of the city.

“Nature is a complex structure and holistic system which permanently reshapes and renews itself.” Jakob von Uexküll

For Information
As a freelancer, I make a modest income from my participation in the Amazon EU Associates Programme, an affiliate advertising programme designed to provide a means for sites to earn advertising fees by advertising and linking to Amazon.co.uk. Many of the images on this website are from Pixabay  and Unsplash, both great resources for free high quality pictures.